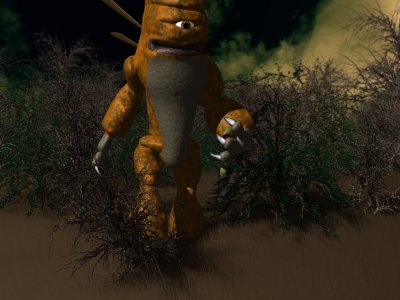 Description: Gouracks are rare creatures with a reputation as having an evil temper, they dwell in jungles on a few isolated worlds and will attack on sight all other creatures over 1 meter in height. They seem to be sensitive to the electronics in Repulsorlift engines and in Droid brains, which makes them even more irritable, and are drawn to attack inorganic targets first disliking their unnaturalness in its environment, therefore attacking droids, vehicles and armoured beings before non armoured beings. While very few of these creatures have been studied in any detail, their agressiveness and dislike of technology has led to some people suggesting that they may have been engineered in some ancient time as a biological weapon. If this is so it would explain how such a creature managed to come into existence on such a widely space variety of planets.