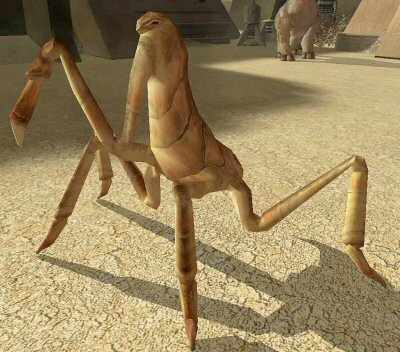 Special Abilities
Infra Red Sense: Kinrath have no eyes but can sense heat, effectively giving them infra red vision over a short range.
Venomous Sting: Kinrath have a poisonous bite which does 6D damage if it manages to breach the victims skin (any successful hit which manages to overcome any armour).

Description: Kinrath are a species of large, non-sentient arachnids. They live on Dantooine and Kashyyyk, and possibly other planets. They are normally a light yellow-brownish color, but other varietes were slightly differenly colored. One other variety was the Viper Kinrath. Kinraths grew to their full size quickly, some hatchlings seen had been nearly the size of adult Kinraths. Kinrath seemed to be hive creatures, and a single female Kinrath Matriarch was the leader of a hive of Kinrath.

Kinrath have four legs and a leg-like, poisonous appendage coming out of their faces that they used to attack things. All Kinrath have no eyes, so they are, of course, blind. They could sense heat, however, and attack whatever they sensed. What stoped them from attacking each other were sweat glands that they had. Their sweat released a stench that only they could smell, and they did not attack things with the smell of their sweat. It was possible to remove the sweat glands from a Kinrath to avoid being attacked by them when exploring areas infested with them.


Page designed in Notepad, logo`s done on Personal Paint on the Amiga.
Stats by FreddyB. Descriptive Text and Image is from Wikipedia, copyright resides with LucasArts.
Any complaints, writs for copyright abuse, etc should be addressed to the Webmaster FreddyB.