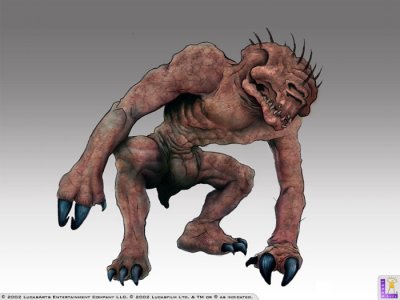 Special Abilities
Low Light Vision: In poorly lit conditions Rakghouls gain a bonus 2D to their perception.          Claws: STR+2D damage
Infectious: If its claws do damage on an attack, the target must roll Stamina vs a Moderate target number, if they fail this they are infected by the disease and will transform into a Rakghoul in 3D+6 hours.

Description: The origin of rakghoul disease is mostly a subject of speculation. The disease was most famous for its outbreak on Taris roughly 4,000 years before the Battle of Yavin. However, the disease had been on Taris for over a hundred years. More than sixty million people were thought to be infected over the course of the disease's run on the planet. Infection was quick and painful after contact with a rakghoul. Once infected, victims had between 6 and 48 hours before they turned into rakghouls. The turning racked and distorted the victims' bodies, draining their skin pigmentation and altering their bodies into a tight, whitened corpselike state. During the onset period, victims were weakened but still lucid. The disease was not communicable during onset, though few uninfected Humans wanted to be nearby in case the victim succumbed sooner rather than later. Many infected victims begged to be killed before they became full rakghouls. Others fled to exile outside community walls, while a few vengeful surface dwellers attempted to find their way up into the spires to infect the rich before the disease overcame them. The rakghoul turning seems to have been mainly a Human phenomenon, although some near-Human species supposedly also were infected. Then again, given the radical physical transformation following infection, the victims' original shapes could have been nearly anything.

Subtle as a rancor, rakghouls charge toward anything that looks or smells like food. They travel in packs of four to eight, sometimes led by a more intelligent rakghoul known as a fiend. Rakghouls eat nearly any organic matter. Though they expend much effort running and fighting among themselves, they seem to survive on few calories. Witnesses have reported rakghouls living (and fighting) for days without food, only to wolf it down when finally acquired.


Page designed in Notepad, logo`s done on Personal Paint on the Amiga.
Stats by FreddyB. Descriptive Text and Image is from Knights of the Old Republic. Copyright resides with LucasArts / BioWare.
Any complaints, writs for copyright abuse, etc should be addressed to the Webmaster FreddyB.