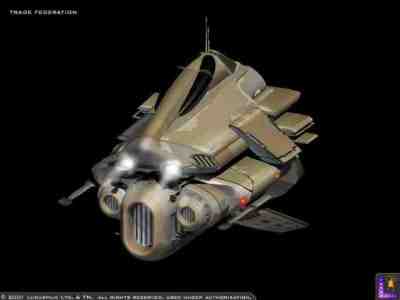 Description: The Air Attack Bomber is a Trade Federation droid vehicle designed to act as a heavy attack bomber without the Trade Federation having to tie up their Droid Starfighters and Bombers in ground operations. In this role it was fairly successful, but the situations requiring such a specialised vehicle were few and far between, meaning as resources became rarer as the Clone Wars dragged on, not only were AAB produced in smaller and smaller numbers, but they were also required to take part in battles that they were ill suited to fight. And indeed in operations against enemy air speeders the AAB is slow and unweildy, making it an easy target and causing massive losses, even though opponents grew to be wary about the power of this air speeders torpedo launcher. After the Clone Wars the Empire destroyed most of the remaining AAB's, although a few managed to find their way onto the black market where they have become popular as a terrorist weapon.