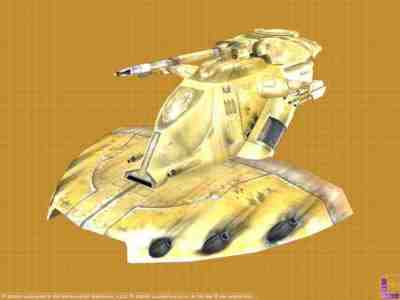 Description: The AAT is the standard Trade Federation Repulsor Tank, and was used from the Battle of Naboo until the Trade Federation was defeated during the Clone Wars. Although the Trade Federation used a variety of different Repulsor Tanks until the AAT was developed, these were all mothablled in favour of the AAT which was better armed and cheaper than its ancestors. Compared to newer Imperial and Republic designs, the AAT is slow, unweildy and weak, however the quantities that these were deployed in made up for their weaknesses and what they lacked in power they made up for in disposability.


Page designed in Notepad, logo`s done on Personal Paint on the Amiga.
Text completely by FreddyB. Image by Lucasarts, copyright remains with them.
Any complaints, writs for copyright abuse, etc should be addressed to the Webmaster FreddyB.