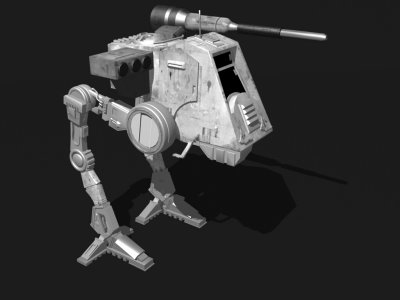 Description: The AT-PT design was redeveloped a number of times by both sides in the Galactic Civil War, being used where larger walkers such as the AT-ST and AT-AT could not go. The weakness of the design however was its poor weaponry, and its inability to cause significant damage to enemies. The Imperial AAT-PT is a AT-PT with heavier weapons mounted either side of its cockpit which allow it to compete on equal terms with other walkers. The Heavy Laser cannon mounted to the left of the pilot is the same as those mounted on AT-AT's, allowing significantly higher damage and range than the blaster cannons mounted on normal AT-PT's. The Concussion Missiles on the right hand side of the pilot are powerful concussive missiles which can shatter most walkers and cause heavy damage to starships. The AAT-PT was introduced in small numbers, but production was eventually abandoned due to the high failure rates among the vehicles power generators caused by the extra drain placed upon them by the Heavy Laser Cannon. The ones built are mainly left in service although they do require higher levels of maintanence than almost all other Imperial vehicles, a fact which makes them unpopular with Imperial officers and bureaucrats.