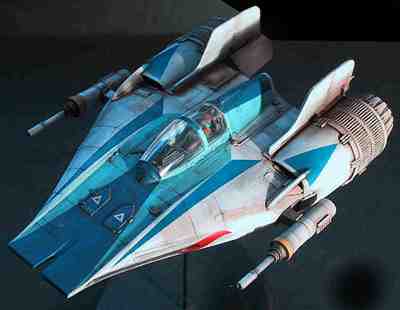 Description: With the Empire and Sienar releasing new Tie fighter variants on a regular basis, the New Republic was forced into continued upgrading of its fighter wings or be forced into a losing position by Imperial space superiority. However new fighters would mean having to retrain pilots and suffer a corresponding loss in efficiency while they learnt to control the new vessels, so the Republic upgraded the fighter designs it already used, with the X-Wing especially going through numerous upgrades and redesigns in its lifetime. The Advanced A-Wing is a upgrade of the standard A-Wing fighter as developed by Walex Blissex and Jan Dodonna, with larger and more powerful engines giving greater speed and manueverability, and extra laser cannons improving the fighters offensive capabilities. The engines also provide extra power to the ships subsystems, allowing more powerful shields to be installed and the targetting jammer to be upgraded. The Advanced A-Wing still suffers from many of the original A-Wing's weaknesses, lacking any missile weapons and their correspondingly heavier punch, having a weak hull and relatively weak shielding, making it somewhat fragile compared to other Republic fighters. The Advanced A-Wing is being introduced in small numbers and is proving popular with both Republic pilots who like its extra speed and firepower and with engineers who find the interchangability of parts with original A-Wing's useful and makes maintanence far easier than with a new design.