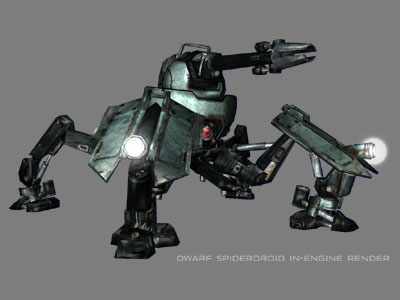 It was built for tough combat on uneven terrain, and was therefore equipped with multiple weapons-systems. These included dual target- seeking missiles which would fire once the targeting systems had a lock-on.

On top of the droid's frame, was a powerful cannon that shot high-energy bolts with explosive power and tremendous range of destruction.

Republic clone commandos would face several of these war droids during their covert missions throughout the Clone Wars.


Page designed in Notepad, logo`s done on Personal Paint on the Amiga.
Stats by FreddyB. Image is from Republic Commando, Descriptive Text from Wikipedia and copyright resides with LucasArts.
Any complaints, writs for copyright abuse, etc should be addressed to the Webmaster FreddyB.