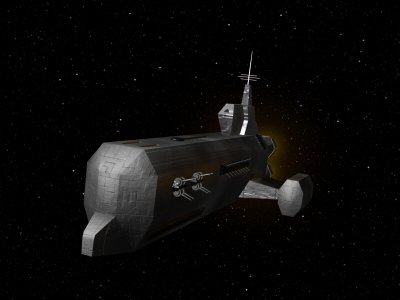 Description: Alderaanian Patrol Frigates date back many centuries into the history of the Old Republic, and were used to patrol and protect Alderaans system and the shipping in and around it. It those days the Republic was nowhere as peaceful as it became in its later days, and each planet had to protect itself and its commerce, and as one of the larger and richer worlds Alderaan had more of a responsibility than most. The Patrol Frigate is slow and clumsy by modern standards, and the fact that its fields of fire cover only the sides of the vessel would be considered a major weakness now, but the fact that the Frigates armour was stronger than anything else flying in those days, meant that the Frigate often used a ramming manuever to take out anything that got in its way. True starfighters were extremely rare in those days, but the frigate was capable of carrying a small number of atmospheric fighters which it could launch to assault any planet bound targets. These vessels were one of the most powerful ships built in that era, and the Alderaanian government was approached by a large number of planets wanting to buy these ships, and the close ties formed by the alliances which provided these mighty starships to other worlds helped bind the Republic into the entity which it later became. Very few of these vessels survive, mainly because of the age of the design, but also because of the anti-war feelings of the Alderaanian people, and the drive they later had to destroy all of the weapons of war their people possessed.