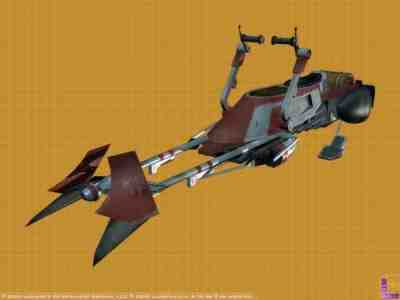 * - Although the official line is that the speeder bike used by the Clone Troopers in Attack of the Clones is the Aratech 74-Z, I found it somewhat hard to believe that while the Empire changed everything from their Walkers to the Armour and Weapons used by their army between Attack of the Clones and Return of the Jedi, they didn`t change their speeder bikes. So when I found the picture I`ve used here, on the web site for the Clone Wars computer game, and saw that the bike was described as having a laser turret, I decided to create this variant.


Description: Although the Aratech 74-Z was used for the majority of the Clone Wars and the reign of the Empire, for their original attack on Geonosis the finished design was not available and a prototype version was used instead. This version was less manueverable and somewhat lighter armed, but carried its laser cannon on a underslung turret which allowed it a much greater field of fire, allowing strafing attacks and shots to be fired at persuers. This however came at a higher manufacturing cost than a fixed weapon, so was abandoned in the finished design. Once the 74-Z became available, the 74-A's used in the attack on Geonosis were dumped onto the market, where they were snatched up, and have continued to be popular to the current day, although parts for the turret are rare, the rest of the bike uses almost identical parts to the 74-Z so remain easy to repair and operate.


Page designed in Notepad, logo`s done on Personal Paint on the Amiga.
Text completely by FreddyB. Image is from LucasArts, copyright remains with them.
Any complaints, writs for copyright abuse, etc should be addressed to the Webmaster FreddyB.