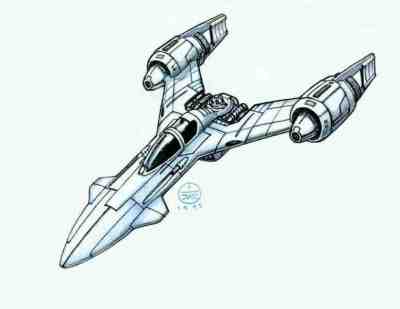 Description: With the A-Wing fighter was a superb starfighter during the years of the Rebellion, due to its incredible speed and manueverability, however once the New Republic was formed instead of convoy raiding the A-Wing was pressed into service as an escort fighter, a role it was ill suited to, but against the remnants of the Empire this made little difference since it still totally outclassed the Tie Fighters that it was put up against. But when the Republic was faced with threat of the Sith/Empire alliance, and the upgraded fighters they were fielding, the Republic began looking for a new fighter to replace the A-Wing, this was Incom's attempt at filling the role required by the Republic, however this fighter almost direct fills the original A Wings role, which was not what the Republic required. Incom had designed a fighter that was faster, more manueverable, and had more powerful sensors and laser cannons, however while it was a perfect convoy raider in the same way the A Wing was, it totally failed to meet the new requirements, so lost out to Koensayrs T Wing. The Arrowhead however has been bought in small numbers by the Republic, and is now being sold on the open market.

Page designed in Notepad, logo`s done on Personal Paint on the Amiga.
Text completely by FreddyB. Images is from TheForce.net copyright resides with the Artist.
Any complaints, writs for copyright abuse, etc should be addressed to the Webmaster FreddyB.