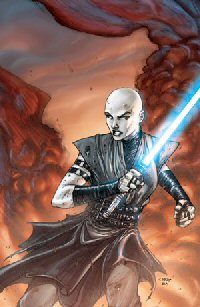 
One of the most deadly and tragic opponents to emerge from the battlefields of the Clone Wars was Asajj Ventress, a disciple of the dark side and sworn enemy of the Jedi. A lifetime of enduring cruel hardships had purged any compassion from her cold heart, and a fierce survival instinct forged in the ceaseless dangers of her bloody homeworld kept her on the dark path.

Much of her past remains shrouded in mystery. Ventress hails from Rattatak, a barbaric world where violent bloodshed is a daily occurrence. The primitive planet is far from the Republic borders, and is ruled by brutal warlords who constantly battle for domination. A warlord named Osika Kirske murdered Asajj's parents when she was very young. Somehow, a young Jedi named Ky Narec came to be stranded on this forsaken world. Cut off from the Jedi Council, Narec discovered Asajj and took it upon himself to train the Force-strong orphan. The two quickly became heroes, vanquishing many warlords, ending wars, and uniting armies until Kirske conspired with the remaining warlords to retaliate. They succeeded in killing Narec before he could complete Asajj's training.

As a result, she had the skills of the Jedi combined with a raw, unfocused talent in the Force. She never controlled her instinctual fury, and when her master died, she developed a hatred for the Republic that had abandoned her mentor, and had ignored the atrocities of Rattatak.

Asajj's rage fueled her power, and she clawed her way up to a position of authority on the lawless world of Rattatak. She conquered and imprisoned most of the remaining warlords, including Osika Kirske, whom she would eventually kill. She could best any of the monstrous combatants in the gladiatorial games held regularly on the world. Shortly after the outbreak of the Clone Wars, Count Dooku came to Rattatak, looking for another world to add to the Separatist fold. What he found instead was far more promising.

Ventress' raw talent and fierce determination impressed Dooku. The charismatic leader of the Confederacy was able to recruit the young warrior by appealing to her disgust with the Jedi and the Republic. Dooku confirmed Ventress' bitter ideas that the Jedi had abandoned their ethics and convictions. Ventress proved her skills by challenging Dooku to a duel. Though Dooku won the sparring contest, he invited Ventress to accompany him back into the Confederacy as a personal protégé.

Though Ventress longed to identify herself as a Sith, she did not receive Sith training. While Dooku helped hone her talents, he taught her none of the knowledge unique to the Sith. Her skills were a combination of incomplete Jedi training coupled with her own techniques. Her raw talents and bottomless well of anger and pain bolstered her dark side abilities. Giving into her rage granted her further powers.

Ventress proved to be a cunning military mastermind, and Dooku made her a commander within the Separatist army. One of her first assignments was disrupting a meeting between Jedi Master Mace Windu and a group of dissident Jedi. Dooku had no compunctions about exploiting and lying to Asajj to meet his ends. He told her that Windu was responsible for the abandonment of her former Jedi mentor. Asajj did battle with Windu on the moon of Ruul, and though Asajj was forced to flee the fight, Windu came to realize that a new and dark menace to the Jedi was at large.

Asajj was in command of a Separatist plot to unleash a deadly chemical weapon on the Gungan colony moon of Ohma-D'un. This was an early test of a chemical warfare program against the clone troopers of the Republic. Though Asajj and Durge had to flee the Naboo moon, they had proven to be formidable opponents against the Jedi.

General Obi-Wan Kenobi followed Asajj to the chemical weapon development plants on Queyta. Asajj was tasked by Count Dooku to once again offer Kenobi a chance to join the Separatists, but the Jedi refused. Asajj again escaped to plague the Republic on other battlefronts.

Four months after the Battle of Geonosis, Asajj joined the fighting on Muunilinst, where Republic clone troopers attacked droid factories on the InterGalactic Banking Clan homeworld. Though the bounty hunter Durge handled the ground campaign, Asajj soared into battle aboard one of her fanblade starfighters. Her incredible piloting skills drew the attention of Anakin Skywalker, the Padawan who was leading the space forces. Despite orders not to pursue, Anakin gave chase, and Asajj lured the young Jedi-in-training into a trap.

Anakin followed Asajj through hyperspace to the ancient Sith temples of Yavin 4. Anakin continued his pursuit on foot, aided by clone troopers. Using the Force, Asajj whittled away the clone trooper guards, and then began a stunning lightsaber duel with Anakin. So skilled was she, Asajj even proved to be a challenge to the fabled Chosen One of Jedi legend. To defeat her, Anakin needed the edge granted by giving into anger. In a furious counter-attack, young Skywalker repulsed Ventress, who nevertheless survived.

After being captured on Jabiim, Jedi General Obi-Wan Kenobi and the ARC trooper known as Alpha were transported to Ventress' private fortress on Rattatak. There, she tortured the prisoners in hopes of breaking Obi-Wan's spirit and presenting the defeated Jedi as a trophy to Count Dooku. Kenobi foiled her plans, though, and escaped along with Alpha. Adding insult to injury, Kenobi stole Ky Narec's lightsaber, which Ventress kept as a memento of her past, and left Rattatak by absconding with one of her fanblade fighters.

Asajj has perfected a lightsaber combat form that uses paired blades to strike and parry. She carried twin weapons given to her by Count Dooku, and each bears a similar archaic curved handle design favored by the former Jedi Master. Ventress' lightsaber handles are especially modified so that they can connect into a joined, S-shaped handle, becoming a double-bladed lightsaber.


Page designed in Notepad, logo`s done on Personal Paint on the Amiga.
Stats by FreddyB, Descriptive Text from StarWars.com. Image is by LucasArts, copyright remains with them.
Any complaints, writs for copyright abuse, etc should be addressed to the Webmaster FreddyB.