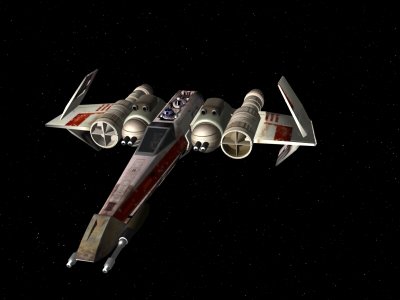 *: The Blaster Cannon turrets on the Assault Gunship are operated by the vessels Astromech droid in defence of the fighter, the droid itself has no skill with these weapons so relies almost totally upon the target aquisition systems of the fighter itself.

Description: The X-Wing fighter has constantly been one of the most successful fighters ever constructed, both in military and commercial success, however this success has also forced the fighter into roles it was never intended to fulfil. The Assault Gunship is an adaptation of the X-Wing design intended for anti capital ship use, and has been designed with powerful turbolasers as well as anti starfighter weaponary aboard it. The ship has two large pods either side of the cockpit which contain twin turbolaser cannons plus the power generators needed to fire them, atop these pods are turret mounted blaster cannons which are operated by the fighters astromech droid in defence of the vessel. This is intended to allow the pilot to concentrate on his target, and allow the defence of the fighter to be achieved virtually automatically, although in reality an Astromech droid is not a perfect gunner and requires some help and convincing to take down sentient attackers. The proton torpedo launchers have been removed since the fighter is considered to have enough firepower with its turbolasers, and the addition of two heavy Ion Cannons round out the gunships weapon load, allowing it to disable most starfighters with relative ease. The Assault Gunship is a powerful vessel, something demostrated by its price, which has kept its sales low, but these tough fighters have gained a lot of respect across the galaxy and sales look likely to continue in modest levels for some time to come.