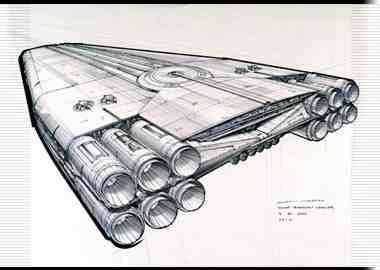 Description: As the Clone Wars dragged on, the Trade Federations system of using battleships to carry troops and landing ships turned out to be a great disadvantage as their capital ships became tied up during ground battles and could not take part in vital space battles. To help counter this problem, the Trade Federation built a new type of landing ship the C-9997, designed to be able to transport troops through hyperspace and to be able to defend itself if necessary. These ships were introduced too late to make any major difference, but since have become a much desired class of capital ship, because of its high speed in an atmosphere as well as powerful shields and weapons. When outfitted by the Trade Federation, the Assault Landing ship could carry 138 AAT's, 22 MTT's and 35 RTTS's and their entire Battle Droid cargo.


Page designed in Notepad, logo`s done on Personal Paint on the Amiga.
Text completely by FreddyB. Image is by Lucasfilm copyright resides with them.
Any complaints, writs for copyright abuse, etc should be addressed to the Webmaster FreddyB.