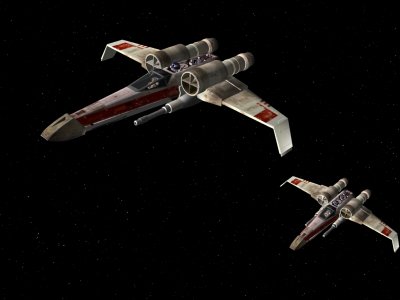 Description: The Incom T-70 Assault Wing is a continuation of the evolution of the Z-95 Headhunter/T-65 X-Wing design, keeping the single wing design of the Headhunter, but improving the engines, weapons and shields to the standard of the X-Wing. The Twin Heavy Laser Cannons are powerful, and easily the match for the quad lasers of the X-Wing, and the Assault Wing manages to match the X-Wing in almost every other field as well. The Assault Wing sold in small numbers due to its withdrawl from the market place when Incom was nationalised, but the fighter had received very positive reviews and publicity by this time, and was well received by all those who purchased it. The Assault Wing is designed for easy storage and handling aboard carriers, and the outer part of its wing is retracted when the vessel is landed for this purpose, reducing the space needed when the vessel is being maintained and stored making it easier to store larger quantities of Assault Wings than either Headhunters or X-Wings.