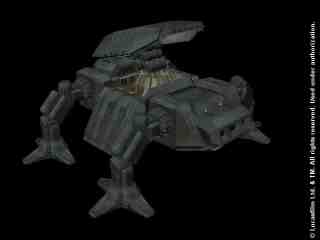 Description: Although the Battle of Hoth was an overwhelming success for the Empire, with many Rebel troops being slain, and a massive capture of supplies and resources, the loss of a number of ATAT walkers to airspeeders was a blow to the Empire's image of the walkers as almost undefeatable in combat. In an effort to avoid the repeat of this happening, the Empire developed and introduced the ATAA, design to take on Air Speeders at extreme ranges and to take them out before they could make attack runs on the Empires ATAT and ATST walkers. Although the ATAA was hailed as a success, it was never really tested out in reality, since there were no other huge Imperial/Alliance ground battles before the Emperors death at the battle of Endor. After Endor, the Empires resource base was severly crippled that producing new ATATs became a priority rather than auxilary craft such as the ATAA, so few more were built.