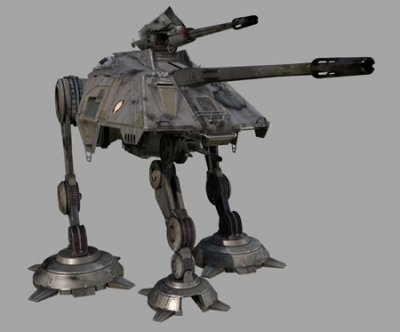 Description: As the Clone Wars escalated, the Republic military built up their ground forces with newer, more versatile models of walking battlefield armor. This two-legged model, dubbed the pod attack walker, featured artillery cannons and a third retractable leg used for stability during long-range weapons firing. Clone trooper drivers piloted this walker model in such heated campaigns as those found on Kashyyyk and Felucia. A larger iteration of the successful All Terrain Personal Transport (AT-PT), the All Terrain Attack Pod scaled up much of those systems into a two-man model. Though still too small to be deployed on its own, the AT-AP nonetheless transforms battlefield infantry into mobile medium-range artillery.

The adjustable suspension system gives the AT-AP walker stability and maneuverability over uneven terrain. The third leg lowers in the event of uneven terrain, or when the centrally fixed heavy projectile cannon fires.

The top-mounted swivel blaster has a gunner's saddle, and is best operated by a third clone trooper, seated outside the walker's armored cabin. Behind the saddle is a supply cage filled with tools to repair mechanical malfunctions within the walker's articulation assembly. Slung beneath the walker's cabin is a pivot-mounted medium laser cannon.


Page designed in Notepad, logo`s done on Personal Paint on the Amiga.
Text by FreddyB. Images by LucasFilm, copyright remains with them.
Any complaints, writs for copyright abuse, etc should be addressed to the Webmaster FreddyB.