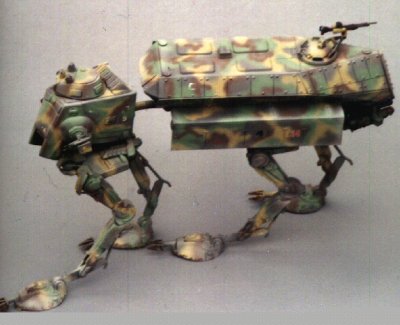 Description: The All Terrain Armoured Personel Transport is an Imperial troop transport designed to handle the same kind of terrains that walkers handle best, but providing a cheaper alternative to the AT-AT. Consisting of a modified Scout Walker at its front end, towing the troop carrying compartment at its rear, stripped of its main cannons the head section still has its side weapons for defence and assault, while the rear section has a single repeating blaster for defending the vehicles sides and rear. AT-APT's are used in small amounts throughout the Empire, although their lack of combat effectiveness and limited capabilities has meant that the Empire has much preferred to use AT-AT's where ever possible.

Page designed in Notepad, logo`s done on Personal Paint on the Amiga.
Text completely by FreddyB. Image by Scale Tech, no claim on copyright is attempted.
Any complaints, writs for copyright abuse, etc should be addressed to the Webmaster FreddyB.