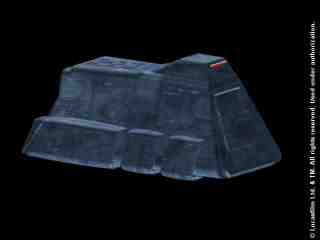 
Description: The Sienar AT-AT Barge is a simplistic vessel, designed for only one purpose, to transport a single AT-AT Walker from orbit to the surface of a planet. The Barge's one redeeming feature is its extremely heavy armour, which allows it to resist massive amounts of damage, but apart from this it is a slow, unmanueverable vessel which carries only small amounts of supplies. There have been a number of these ships which have been abandoned and later salvaged, and modified into cargo vessels. In this form they can carry a large amount of cargo (300 tonnes), but lose a fair amount of this to the addition of hyperdrive and weapons. It is also worth mentioning that the AT-AT Barge has one of the worst sensor packages ever designed, which was a blatant cost cutting exercise by Sienar, since these ships would usually be operating from Star Destroyers, with Tie Fighter Escorts, so sensors were considered to be a necessary but unimportant feature.