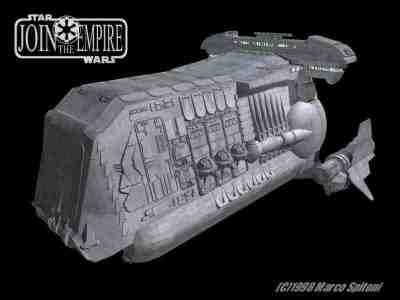 Description: The AT-AT Dropship is an upgrade of the older AT-AT Barge, and although it is barely larger than the Barge, it has a number of improvements over the older design. The Dropship is a starship in its own right, capable of carrying a single AT-AT walker through hyperspace to a distant target. With hyperdrive capability and fatser engines the Dropship is a fairly decent starship, and coupled with the already tough armour it has inherited from the Barge, the Dropship can be improved into a good combat vessel. However the Empire has only limited numbers of these ships, and they are used during important assaults only, operating in conjunction with Star Destroyers deploying AT-AT Barges to bolster a ground attack. Dropships are extremely rare outside of Imperial control, and it is totally illegal for civilians to own one within Imperial controlled space.


Page designed in Notepad, logo`s done on Personal Paint on the Amiga.
Text completely by FreddyB. Image is by Marco Spitoni, copyright resides with him.
Any complaints, writs for copyright abuse, etc should be addressed to the Webmaster FreddyB.