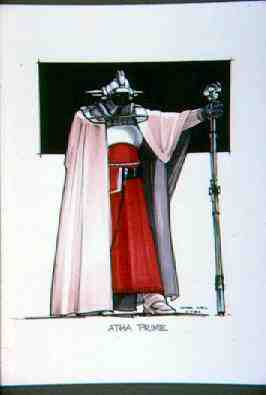 
Atha Prime started life on Coruscant and as a highly intelligent child from a noble family he received the best education money could buy, developing a keen interest in Kaminoan cloning technology. So when the Clone Troopers were brought into service for the Republic, Atha was contracted by the Republic to monitor the cloning processes to make sure that everthing was legal and above board. Being in a position to discover Chancellor Palpatines manipulation of the situation he became a target for Palpatines corruption and manipulation himself.

Atha was easily warped to the dark side, his intense curiousity and interest in all things scientific were enough to hook him deeply into the dark side, and its corruption took hold. As the Empire was founded, Atha Prime was one of the main architects of its organisation, working side by side with Emperor Palpatine, Lord Vader and Governor Tarkin, he helped bring the Empires machines of war and apparatus of terror into being. However as with so many of Palpatines corrupted servants, Atha Prime had higher targets than simply helping rule the Empire, he wanted to rule it. He began to change the training of the Clone Troopers so that they would follow his commands only, and began to manipulate the remains of the senate so that he could easily step into Palpatines job after he had the Emperor assassinated.

Palpatine was prepared for this however, and easily discovered Atha Prime's deceptions and preparations, and ordered his Royal guard to seize and hold Prime. Knowing he may have use of the mans intelligence, and may have to rip knowledge out of his mind if any of his plans truly came to pass, Palpatine had a special holding facility built at the very edge of the galaxy. This facility was as large as a Death Star, manned by millions of loyal troops and designed simply to hold this one man in cryostasis, known simply, and secretly as the Galaxies Edge facility, its construction budget hidden with that of the first Death Star, and all knowledge of its location hidden away and restricted to only the very highest levels of Imperial government.

Atha Primes plans caused a number of changes throughout the Empire, as Emperor Palpatine had to make sweeping changes to avoid disaster, destroying the majority of the Clone Troopers to clear Prime's corruption from their ranks, and finally removing the Senate from power to remove his puppets in that institution. As the Emperor had already started to bring humans into the ranks of the Empire, with the creation of the Storm Troopers, and he had planned to remove the Senate at some point anyway these changes did not cause undue problems for the fledgling Empire, but the size of these changes were a testament to Atha Prime's plan and intellect.

Atha Prime passed away into history, and those on the inside of the Empire who knew of his continued existance passed away. However even after the Empires defeat at Endor, and the death of Emperor Palpatine, the Galaxies Edge facility continued to hold its prisoner, but as the years passed, the crew of this station slowly trickled awat, abandoning their posts, as without leadership and without pay they had little motivation to stay.

So it was onto a nearly abandoned station that Atha Prime awoke when the Cryostasis machinery failed. Finding the remaining crew despirited and without any leadership whatsoever, he easily rallied them under his command, and seized control of his one time prison. Within a matter of months he had converted large sections of the station to cloning facilities, and started to churn out improved Clone Warriors returning the station to fully manned and fully operational.

Having already built his own custom Star Destroyer, Atha Prime has ventured out into the galaxy once more, and has found out the current galactic situation. He intends to rally the remains of the Empire behind his rule, and to bring the galaxy under his command, something he is possibly capable of. He believes that Palpatines reliance on the Sith arts were a weakness, just as he believes that any religion is a weakness, he believes the Jedi were the cause of the Old Republics fall, just as they will be the New Republics downfall.


Page designed in Notepad, logo`s done on Personal Paint on the Amiga.
Text completely by FreddyB. Image is by Kenner, copyright resides with them.
Any complaints, writs for copyright abuse, etc should be addressed to the Webmaster FreddyB.