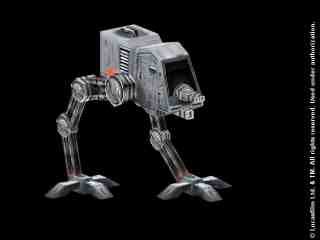 Description: Although the ATST and ATAT Walkers used by the Empire were extremely powerful weapons of war, their size prohibited them from entering areas where repulsor tanks and other small combat vehicles could easily enter, also the Empire felt the need to bridge the gap between the huge walkers and ordinary foot soldiers. So the design for the ATPT was dusted off, and with a few small updates to the design, this small manueverable walker was put into production. The ATPT2 is almost identical to the one designed for the Old Republic, except for a concussion grenade launcher mounted under the cockpit, and minor mechanical modifications, and peforms just as well as its predecessor, capable of turning a single soldier into the match for an entire squad. The New Republic has their own design of the ATPT, and it is far more common to see these small vehicles fighting it out on the battlefield, than it is to see large walkers and combat vehicles, due to the cheapness and speed that these can be manufactured. The Empire has stopped production of ATPT2's now, prefering to build faster and even cheaper Repulsor Tanks, but the sheer quantity of ATPT's in use, means that they will remain a common sight for many years to come.