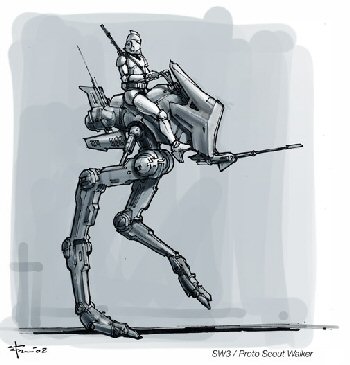 Description: The All Terrain Recon Transport is a light scout vehicle used by the Clone Troopers of the Old Republic. Designed as a heavier assault vehicle than the Aratech Speeder Bikes that the Clone Troopers used as their primary scout vehicle, the AT-RT is still fairly fast and mobile, but was used mainly for quick strikes behind enemy lines at supply convoys and resupply bases. AT-RT's were also used on planets which had magnetic fields which interfered with the use of repulsorlift engines, making speeder bikes useless. Along with the AT-XT (All Terrain eXperimental Transport) the AT-RT was eventually developed into the common Imperial All Terrain Scout Transport, however AT-RT's have remained in operation on some backwater worlds as a police vehicle especially on worlds where riding mounts is the most common form of transportation.


Page designed in Notepad, logo`s done on Personal Paint on the Amiga.
Text by FreddyB. Images by LucasFilm, copyright remains with them.
Any complaints, writs for copyright abuse, etc should be addressed to the Webmaster FreddyB.