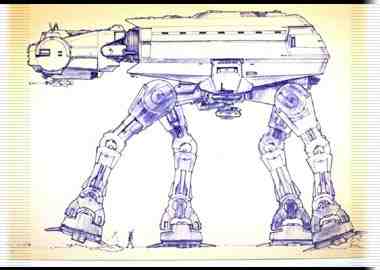 Description: The AT-TT was designed as an improvement to the standard AT-AT walker, built in small quantities after certain flaws began to cause losses amoungst the Empires armies. The AT-TT had more powerful forward weapons, which could cause significant damage to starships, and a lower turret mounted between the legs, was agile enough to take out speeders and personel. This meant that the AT-TT could deal with the Air Speeders that caused so much havoc at the battle of Hoth, however faults with the fire system which restrained the turret from firing at the walkers own legs, meant that many of these walkers were crippled by their own weapons. This caused a corresponding lack of confidence in Imperial leaders, and the AT-TT was only produced in small numbers. The AT-TT lacks the upper deck in its cargo area, so cannot carry speeder bikes in addition to its troops, this was because the turret on the lower surface of the walker increased its height, meaning that the walker could not fit into drop ships and storage areas designed for AT-AT's.