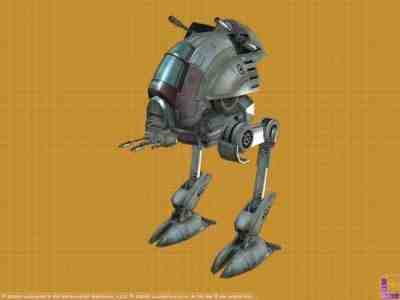 Description: The AT-XT was an experimental walker which actually saw heavy use during the later stages of the Clone Wars, when it was phased out of use and replaced by the AT-ST. The AT-XT had a number of features which were removed for cost reasons when the AT-ST was produced, these included the very efficient Proton Mortar, Shields, and an innovative one up one down cockpit configuration. However for all of these advanced features, the AT-XT was destroyed in large numbers during their battles, since they were slow, clumsy and poorly armoured. After the AT-XT was phased out, a few remained in use on the fringes of the Empire where AT-ST's were in short supply, and the remainder were put into storage or sold off to private concerns such as the Corporate Sector Authority.