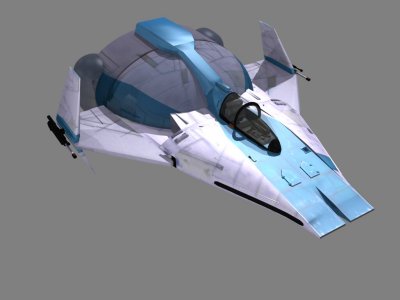 Description: The A-Wing Starfighter for all of its speed and manueverability required extremely rare components and materials to build and maintain, making it expensive and difficult for Rebel units to keep operational. The A-Wing "Pump" was an attempt at removing this disadvantage from what was already becoming a very successful fighter. This design took the largest starship engine that the Alliance engineers could fit into the A-Wing's frame, tuning an engine designed to move a far larger and heavier vessel than the tiny A-Wing, and making it perform to military specifications. While this turned out to make an even faster vessel than the original A-Wing, which could be maintained from existing stocks of transport spares, as well as being more rugged and tough in combat, the vessel was less manueverable and the modifications required to the engine meant that the cost was not significantly lower than the original A-Wing. With the A-Wing already deployed to numerous fighter wings, the A-Wing Pump was destined never to enter full production, although it was deployed to some squadrons far from Alliance supply depots in an effort to avoid resupply problems in those areas.

Page designed in Notepad, logo`s done in Personal Paint on the Amiga.
Text by FreddyB. Image is by "Bob the Dinosaur", copyright remains with him.
Any complaints, writs for copyright abuse, etc should be addressed to the Webmaster FreddyB.