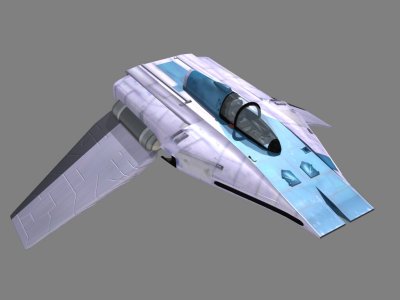 Description: Although the New Republic was never conceived to make a profit, the costs of establishing and running the new government were high and taxes raised in the early days were nowhere near enough to cover these expenses. Eventually denationalising Incom and other captured Imperial corporations, and short term loans from planetary banks would cover the costs, but in the short term the fledgling Republic had to raise money. As well as selling off captured Imperial vessels and cargoes, the republic turned its own production facilities into making a profit, although it could be seen that selling military grade weapons and vessels would cause severe problems in the future. So the Republic factories started making civilian variants of its vehicles and vessels, one of these being the A-Wing Civilian. This fighter is marketed as a single person transport, and is designed to be easy to handle and pilot both in space and within an atmosphere. Armed only with a light blaster cannon, the A-Wing Civ is still a fast vessel even though the Event Horizon engines have been stripped out to make room for a weaker, more easily maintained and less expensive drive unit. These fighters were bought by many planets as defence fighters, only for them to discover that the weaponry was too light, requiring a retrofit of heavier laser cannons, the Republic also bought some of these vessels to use as training fighters allowing pilots to practice and learn without endangering or incurring the expence of a full A-Wing starfighter.

Page designed in Notepad, logo`s done in Personal Paint on the Amiga.
Text by FreddyB. Image is by "Bob the Dinosaur", copyright remains with him.
Any complaints, writs for copyright abuse, etc should be addressed to the Webmaster FreddyB.