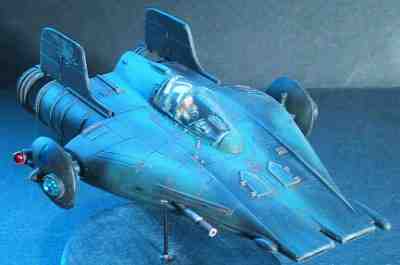 Description: With the Y-Wing Longprobe aging, its sensors and performance became less than impressive when compared to other fighters with some standard sensor packages outperforming the Longprobe's "enhanced" one, it become necessary to replace it with a fighter with more powerful sensors, faster engines and a multitude of enhancements to help it survey areas more quickly and to get out of trouble if discovered. The Reconnaissance A-Wing is a modified A-Wing fighter, with its primary weapons removed to make room for enhanced sensors which double the A-Wings sensor range. The designers decided not to leave the fighter unarmed and mounted a single laser cannon in the forward hull, as well as leaving the Enemy Targetting Jammer in place so that the fighter can evade attackers if discovered. The Event Horizon engines remain unchanged as does the fighters Hyperdrive systems, although the jump computer has been enhanced to contain 6 sets of co-ordinates instead of the standard 2. In all other aspects the Reconnaissance A-Wing remains standard, which enables easier maintanence of this vessel, and allows easy acclimitisation by A-Wing pilots, making this a popular replacement for the Y-Wing Longprobe, and a common conversion for A-Wing's as they are phased out in favour of newer designs such as the Enhanced A-Wing and A2-Wing.