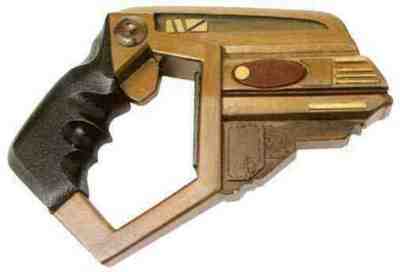 
Description: The Bajic Blaster pistol was designed and built for the security forces on the planet Devi, a heavy blaster pistol with integral aiming aid abilities. The weapon produced was rugged, used a trickle charge through the laser emitter to create a laser sight effect (+1D to skill), and provided everything the original design request had asked for and more. The only problem with the design was a shorter range than most Heavy Blaster Pistols, however this wasn't really considered to be a disadvantage for the Devi Security forces because they used Blaster Rifles for longer distance shots. The design was considered so good, that it has become quite popular even for a backwater world produced blaster weapon, and sales have allowed DeviAng Industries to start off world production facilities to meet demand, as well as becoming Devi's largest employer.


Page designed in Notepad, logo`s done on Personal Paint on the Amiga.
Text completely by FreddyB. Image is by Paramount, copyright resides with them.
Any complaints, writs for copyright abuse, etc should be addressed to the Webmaster FreddyB.