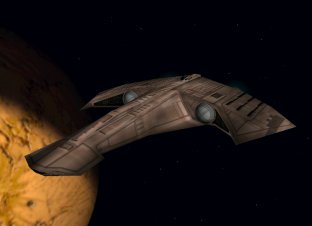 Description: The Harkners-Balix 903 is a conventional light transport often used by corporations and the independent market, and is a common rival to the Corellian YT series of freighters. Many modified versions of this craft, are used by pirates and smugglers who take advantage of the larger than average cargo hold to add weapons faster drive systems and a variety of other improvements and modifications. The famous smuggler Talon Karrde uses the HB-903 "Etherway" to a great extent, a vessel heavily modified with smuggling compartments and the addition of six turbolasers which make it a powerful combat vessel and a big surprise for any customs vessel which attempts to board it.


Page designed in Notepad, logo`s done on Personal Paint on the Amiga.
Stats by FreddyB, descriptive text originally by Flavid, extended by FreddyB. Image is by Flavid, based on the frighter seen on page 1 of Issue 6 of The Last Command comic, copyright resides with him, Dark Horse Comics and LucasFilm.
Any complaints, writs for copyright abuse, etc should be addressed to the Webmaster FreddyB.