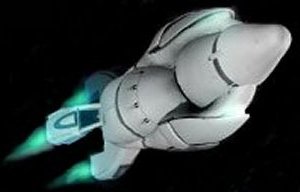 Description: Built as a transport vessel for the Intergalactic Banking Clan, the StarFlare Class vessels fall between combat vessels and transport ships. With decent shielding and good weaponry they were obviously not simple transports, but since they performed not only the commerce duties of the Banking Clan, but also transported its military forces, including their lethal Hailfire missile droids they obviously had to. StarFlare Class vessels were used as transports during the Clone Wars, but were outmatched by pure military combat vessels and very few survived the defeat of the separatists at the end of the war. These few vessels were claimed by the Empire as recompense for some the cost of the wars, and were sold off onto the open market, where they serve to this day. The StarFlares usually operate on the fringes of the galaxy where their armament is needed, and one or two have been used by poorer worlds as front-line battleships, but these ships have become part of history and are very rarely seen in use.