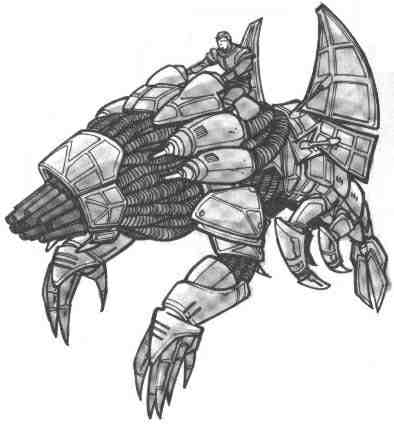 
Description: The Mandalorian Basilisk War Droid was used by the Mandalorian Raiders many centuries ago, and are still remembered in some areas of the galaxy. These large early walkers were not actually droids at all, lacking any kind of intelligence in themselves, however they were extremely efficient walkers, and although they lacked an enclosed cocpit they still increased the combat effectiveness of their pilot by many times. The Mandalorian pilot would wear sealed armour, and the Basilisk would aid them in the drop from their orbiting ship, as well as helping to attack any orbital defences. The mass of weapons equipped to a basilisk allowed it to do a great deal of damage to opponents, however the majority of its weapons are close ranged due to the Mandalorian preferance for fighting their opponents close up, and while this hampered the vehicles in ranged combat, the sheer terror value of these walkers made them hugely successful and long remembered in legend.


Page designed in Notepad, logo`s done on Personal Paint on the Amiga.
Text completely by FreddyB. Image by Bill Hughes, and copyright remains with him.
Any complaints, writs for copyright abuse, etc should be addressed to the Webmaster FreddyB.