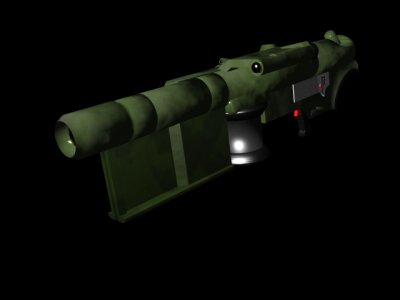 
* : If the SLX-445 is held on target for repeated rounds its damage increases by 1D for each round, until it reaches a maximum of 10D. This means that if the user manages to score a hit each round, the SLX-445 will do 5D in the first round, 6D the second round, until the fifth round when it does 10D.

Description: The SoroSuub SLX-445 is a heavy laser cannon designed to be used as a pintile mount on a speeder, or as a tripod mounted weapon, however it remains light enough to be used by a single man. Capable of taking out speeders, repulsor tanks and light walkers, the SLX-445 is unique in that it can be fired as a sustained beam, creating greater damage as it is held on target. The sustained beam of the SLX-445 makes the weapon somewhat easier to target than a weapon of its bulk would normally be, but this speeder scale weapon still is not easy to target upon human sized targets and is far more suited to taking out vehicles.