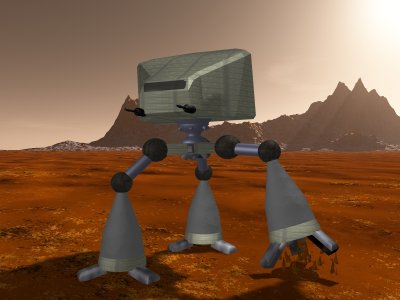 Description: Although the Behemoth is classified as a Medium Walker it isn't much lighter than Heavy Walkers such as the AT-AT, it was designed for the Republic by the Verpine of the Roche Hive, and constructed from commonly available parts and resources to enable the New Republic to be able to manufacture as many as possible for as low a cost as possible. Although the interior is cramped, it still contains enough room for 10 fully armed and armoured troops, although it must stop and squat for these troops to be deployed. The head section of the walker can rotate through 360 degrees allowing this vehicle an unequalled field of fire with its heavy blaster cannons, and the tripod arrangement of legs makes it a more stable firing platform than Imperial Walkers, which accounts for its fantastic fire control systems. The heavy armour plating of the Behemoth makes it heavy for its size, which in turn makes it somewhat difficult for the New Republic to find transport vessels which can carry it, however this disadvantage is insignificant against the advantage the Behemoth gives the New Republic in being able to fight Imperial AT-AT walkers on an equal footing for the first time.