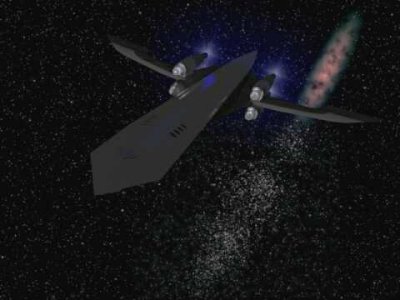 * - The Black Dragon has a stealth coating on its hull which reflects sensors away from the vessel, reducing all attempts to detect the vessel or to scan it by 3D.


Description: The Black Dragon Class Stealth Transport is a very expensive and highly sought after space transport, this is due to the small production run forced upon Galactech by the Empire. This was because the Black Dragon is built to evade detection, with powerful engines and a sensor deflecting coating, seemly purpose built for smuggling and blockade running. The Empire felt that this was a step too far towards supporting the activities of illegal groups such as smugglers and rebels. The Black Dragon is a long sleek vessel, with a huge amount of cargo space within its streamlined hull, its four powerful ion engines allow it a fantastic turn of speed and incredible manueverablility, making owners believe that the vessel is worth every credit of its enormous price. Inside the Black Dragon is utilitarian, although many owners refit it into luxury that would put a yaght to shame, and on the rare occasions that Black Dragons come onto the open market they are usually snapped up within hours of them becoming available, as the queue of potential owners are rich enough to have contacts watching for the next possible sale. Some owners find the Black Dragon Class to be under armed, but the whole concept of the vessel is not as a fighting vessel, but a ship fast and stealthy enough to avoid a fight if at all possible.