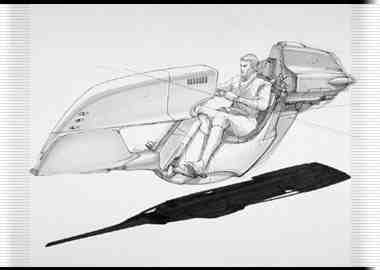 Description: The Bloodfury is an upgrade of the Bloodfin Speeder Bike also from Sienar, after the Bloodfin failed to attract the military sales it was originally designed for, and with upcoming large purchases for the Clone Troopers, and later Storm Trooper armies, Sienar redesigned the Bloodfin into a real military speeder bike. With twin laser cannons capable of doing significant damage to a target, the already high speed of the Bloodfin and additional armour and manueverability, the Bloodfury made a very powerful combat bike. However the high cost and difficulty to manufacture in the quantities required for the Clone Troopers meant that the design lost out on this lucrative contract to Aratechs design. The Bloodfury was sold to other military purchasers in limited quantities before the design was eventually dropped, these few bikes have continued to retain a high value and are considered to be among the best speeder bikes available, even if they are becoming increasingly hard to acquire parts for.