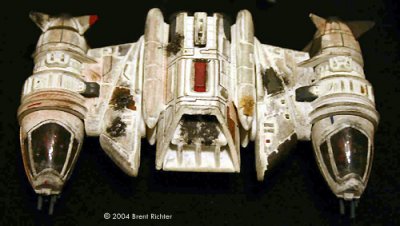 
Description: The design for this ship was originally proposed by the Chief Engineer and his senior engineers aboard Home One. This design was proposed after it was determined that it was impractical to install new intel gathering hardware aboard existing fighter craft. The intel equipment required a full time operator when in operation, thus requiring installation in a two person fighter. At the time, no existing two person fighter in the Rebel Alliance inventory was suitable for the required modifications. Extensive computer modeling was used to validate the proposed ship design. The intelligence people were not enthusiastic about the physical appearance of the design, but did agree it would suit their purposes. Two battle damaged B-wings, that were awaiting parts for repairs, were used for the construction of the prototype. The torpedo launching mechanisms were removed and the intel hardware was installed in their place. The shielding, and 'chin- blasters' were enhanced. The cockpit rotating gyro-stabilization systems were also enhanced so that both cockpit pods would be able to rotate together or independently. Once testing and evaluation of the prototype was successfully completed, five more ships were ordered to be built.

The prototype was sent on six short-term intelligence gathering missions before being recalled for a configuration change. The prototype was 'modified' from the originally intended 'intel' configuration to a 'heavy assault' configuration for further testing and evaluation. The prototype was modified to test possible combat applications for the design against capital ships and fortified planetary targets. The 'heavy assault' prototype had the intel hardware removed and the torpedo launching mechanisms reinstalled - thus increasing the number of torpedoes carried verses that of a B-wing by 50%. However, there was no external visible difference between the 'intel' and 'heavy assault' versions. Two pilots were required for the 'heavy assault' prototype - one to fly the ship and the other to function as a weapons/ targeting and ECM officer. Redundant functionality was incorporated into both cockpit pods to allow the pilots to switch jobs if desired. The poor maneuverability of the prototype in planetary atmosphere was rectified by the addition of four 'rudders' at the rear of each cockpit pod.

Upon successful completion of testing and evaluation of the 'heavy assault' prototype, orders were issued for the construction of 30 ships of this type. The 'heavy assault' prototype (pictured) had it's prototype status removed and was integrated into 1st tactical squadron aboard Home One and was utilized in several hit-and-run missions against planetary and space based targets.

No formal designation has been established for either version of the ship; but informal names exist: "Striker" for the 'heavy assault' version and "Gatherer" for the 'intel' version. When asked about his inspiration for the initial design, the Chief replied, "You ever hear about those Twin Pod Cloud Cars ...?"


Page designed in Notepad, logo`s done on Personal Paint on the Amiga.
Descriptive text and Image is by Brent Richter, copyright resides with him. Stats by FreddyB.
Any complaints, writs for copyright abuse, etc should be addressed to the Webmaster FreddyB.