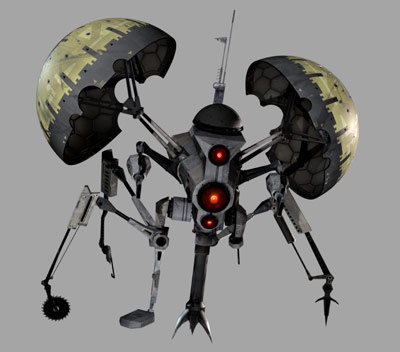 
Description: An insidious weapon unveiled by the Confederacy of Independent Systems during the later stages of the Clone Wars, buzz droids are tenacious saboteurs launched onto enemy starfighters via specialized missiles. When the missile achieves an optimum proximity to its target, it fragments to unleash a cloud of melon-sized metal spheres into the target's flight path. The spheres attach themselves to a target vessel, popping open to reveal an insect-like droid equipped with cutters and other tools of vandalism.

The buzz droids are designed to disable, not destroy, enemy craft. They operate quickly, slicing into starship hulls and severing vital control linkages. While their tools are effective, they are relatively weak and vulnerable to damage. A hit to its central eye can knock a buzz droid out of commission.

Conveyed via a finned discord missile, the buzz droids also have a quartet of simple maneuvering jets to angle into position while in sphere mode. The outer shell of the sphere is heat dissipating, allowing it to penetrate shields, and is built of a shock absorbing material. One of its spindly legs terminates in a magna pod, allowing it to cling tenaciously to an enemy's hull. Though individual tool load-outs vary per mission, the default assortment of weapons include a prying hook appendage, a circular saw, a plasma cutting torch, a drill head sheathing an extendable computer probe for deployment of invasive programming, a picket appendage, and a pincer arm. Its three sensor eyes resolve its surroundings through multiple lenses, filters and X-ray sensors.