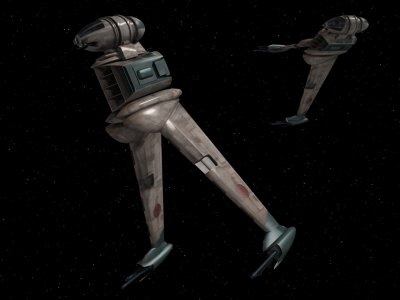 *: The B-Wing Lancers features a hyroscopically stabilised command pod, as well as a ranging mode for the laser cannon. If for some reason, the laser is not operational, reduce all fire control codes by 1D. The B-Wings stabilisation system fails when it suffers heavy damage. In game terms, when the fighter is heavily damaged, a roll of 1-2 (used to determine which system is damaged) mean the stabilisation system has failed. Reduce all fire control codes by 1D (since the craft is no longer a stable weapons platform). Sublight speeds drop from 7 to 3 (atmosphere speed goes from 350;1,000kmh to 250;700kmh). These penalties are cumulative.

Description: Although the Verpine are reknowned to building manueverable spacecraft capable of amazing feats of agility and darting through the Roche Asteroid field. However the B-Wing Starfighter itself was a heavy bomber and was slow and unmanueverable even though it featured many advanced systems such as the gyroscopically stabilised command pod. To provide the Rebellion with a more agile starfighter, Slayn and Korpil developed the B-Wing Lancer, a lighter and faster variant of the B-Wing. Utilising many of the same parts as the standard B-Wing, the Lancer is missing the shorter wings of the B-Wing but has twin swivelling S-foils at the base of the fighter carrying a Laser Cannon and an Ion Cannon each. The B-Wing Lancer is equivalent to the Incom X-Wing in speed and firepower, but lacks the punch of other Rebel starfighters since it has no Proton Torpedo or Concussion Missile Launchers, and its Ion Cannons lack the punch of those on the Y-Wing. These disadvantages caused the Rebel Alliance and later the New Republic to buy very few of these fighters, although did equip a number of freedom fighter groups with the fighters, using them in preference to more popular designs to distinguish their fighters from official Rebel and Republic squadrons.