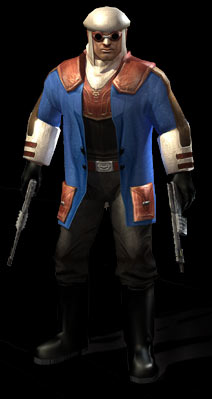 
At first glance he seemed harmless enough. He was small in stature -- a quiet little man who moved with a careful, almost deliberate precision. Yet the twin blasters on his belt gave a hint as to the true nature beneath his disturbingly expressionless face. And among the criminals and scum inhabiting the Outer Rim four thousand years ago, no name was more feared than that of the galaxy's most notorious bounty hunter: Calo Nord

Bought as a slave while still a young boy, Calo began his life of bloodshed on his sixteenth birthday by butchering his owners -- or so the legend holds. His next victims were the ones who had sold him into a life of servitude, his own parents. It was inevitable such bloody vengeance would bring retribution, and a price was placed on the young man's head.

But Calo had a natural instinct for survival, and for killing. He toyed with the bounty hunters who came after him, learning all their tricks and techniques before dispatching them with ruthless efficiency. Eventually the attempts on his life stopped, though not before dozens had failed in their efforts to collect the small fortune resting on his head. Those responsible for placing the bounty on him were the next to feel Calo's wrath. No longer a target himself, Calo became one of the hunters. And with each bounty he collected, his reputation grew.

Calo knew no allegiance other than to hard credits or the thrill of the hunt. He worked for the Exchange on Taris, the Sith in the Outer Rim, and even the Republic in the Core. It was on Sith business that Nord finally met his match -- Republic agents hunting for the legendary StarForge were finally able to defeat the deadly bounty hunter.