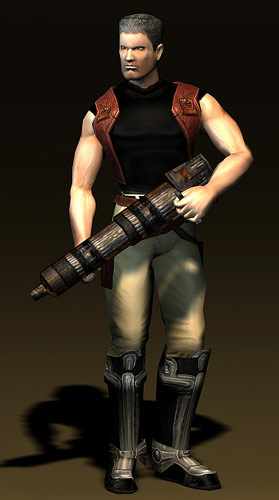 SPECIAL ABILITIES
Regenerative Implant: Canderous has an implant in his body which helps him recover from damage, this allows him to heal at treble the normal healing rate, cutting all recovery times by two thirds.
EQUIPMENT
CREDITS - 2,500
Repeating Blaster (6D Damage), Blast Vest (+1 vs Energy Damage, +1D vs Physical Damage, Torso only), Grenades (5D Damage)


Canderous Ordo made his living as a mercenary four thousand years ago, selling his services to the highest bidder. Most often this turned out to be an underworld figure wanting to capitalize on his considerable skills as a combatant, tactician, and outright thug. If his criminal clients knew where he learned his trade, however, even they might have had second thoughts about hiring him.

Canderous was a Mandalorian, and as such, he was on the losing side of the Mandalorian Wars with the Republic. He was no foot soldier, however, and had an active hand in the planning and execution of many battles that did not go in the Republic's favor. There was a lot of blood on his hands, and he doubted that enough time has passed for people to view his actions as he does, with the impersonal eye of a career soldier. He was pragmatic enough to take no insult from the defeat of his people. It was just business, after all.

Canderous came to be employed by Davik Kang, a crime lord with influence throughout the undercity of Taris. The traitorous actions of Sith Lords Revan and Malak and the continued aggression of the Sith distracted the citizens of the Republic to the point where they were no longer concerned about the defeated Mandalorians. As such, Canderous went about his business mostly in peace.

A born warrior couldn't stay working as a smalltime enforcer for long. It was inevitable that a more interesting offer got Canderous' attention. Following the defeat of the Republic cruiser Endar Spire over Taris, the planet was placed under Sith blockade. Canderous, never one to be trapped, was eager to leave the planet. He found some Republic fugitives also looking to escape, and provided them with the means of slicing into Taris' computer network to retrieve the access codes necessary to leave the quarantined world.

As the Ebon Hawk blasted off from Taris filled with Republic fugitives, the Sith utterly razed the planet. Canderous stuck with the odd mix of escapees, knowing that more adventures lay in the stars, and that ultimately, a greater role lay ahead for the Mandalorian.