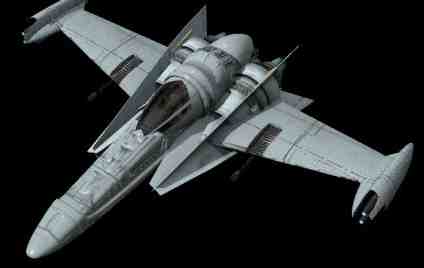 Description: As the Galactic Civil War heated up and more and mroe systems were subjected to the chaos caused by both the Rebel and Imperial forces as well as pirates and raiders taking advantage of the disruption caused, the richer systems of the galactic core began to worry about the soon approaching days when they too would be targetted. The Corellia system long famed for its starship designs decided to upgrade its defence fleet so they would be more prepared for any trouble to come, teaming up with the Verpine starfighter specialists of the Roche Asteroid field they designed the TG-90 defence starfighter. Based heavily on the most successful starfighter of the time, the X-Wing, the TG-90 manages in some ways to improve upon that design, with more powerful sublight drives, a greater flexibility of weaponary and a slightly lower cost. The savings on cost were mainly due to the cut down hyperdrive system, deemed to be sufficient for a starfighter designed to mainly operate within the same star system, and the use of concussion missiles rather than proton torpedos. With decent Laser Cannons, powerful Ion Cannons and the punch provided by its concussion missiles, the TG-90 has developed a reputation as a fighter not to mess with and has in part been responsible for the reduced crime rate within the Corellia System.


Page designed in Notepad, logo`s done in Personal Paint on the Amiga.
Text by FreddyB. Image is from the Star Wars Fan Film "Revelations", copyright remains with the Artist.
Any complaints, writs for copyright abuse, etc should be addressed to the Webmaster FreddyB.