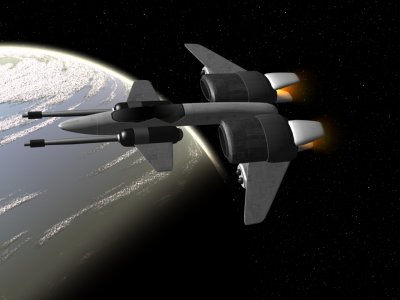 Description: After the destruction of Alderaan a native of that world, Almek Obsidian, became somewhat obsessive about military power, and set up Core Defence Industries (CDI) to supply defence to other worlds so the same could never happen again. However the unbalanced nature of the industrialist and the corporation he founded, led to many headaches for the fledgling New Republic, as the power weapons and vessels were sold to anyone without restriction, meaning that these state of the art weapons of war were available to terrorists, pirates and other criminals. Fortunately, for the New Republic at least, Almek Obsidian died after only a couple of years, and the absence of his genius, although unbalanced, hand at the helm meant that CDI went into receivership shortly afterwards. The CDI Ajin Class Starfighter is based on their powerful Turbo Starfighter, with newer faster engines, and redesigned weaponry, allowing it to serve as an escort for the Capital Ship destroying Turbo's. In this role the fighter is excellent, faster than most other fighters, and carrying powerful weapons to take down any attacking vessels. The Concussion Missile Launchers area design sold by CDI only, which meant that supplies ran short after the bankruptcy of the corporation, but these smart, long range missiles were far more accurate than standard missiles, although normal missiles could be loaded into the launchers (at a -1D penalty and a reduced range of only 50% of that listed). Ajin Starfighters have become common as interceptors, because of their high speed and powerful weapons, outselling almost every other CDI design.