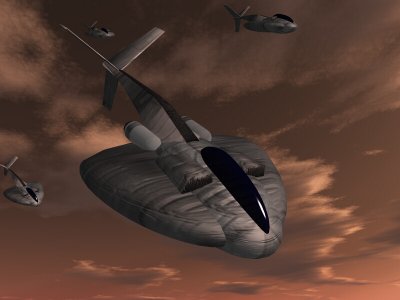 Description: After the destruction of Alderaan a native of that world, Almek Obsidian, became somewhat obsessive about military power, and set up Core Defence Industries (CDI) to supply defence to other worlds so the same could never happen again. However the unbalanced nature of the industrialist and the corporation he founded, led to many headaches for the fledgling New Republic, as the power weapons and vessels were sold to anyone without restriction, meaning that these state of the art weapons of war were available to terrorists, pirates and other criminals. Fortunately, for the New Republic at least, Almek Obsidian died after only a couple of years, and the absence of his genius, although unbalanced, hand at the helm meant that CDI went into receivership shortly afterwards. The CDI Dropper-Class Heavy Bomber is a modified version of the standard Hopper-Class Bomber, designed with a larger hull to accomodate the 4 Concussion bomb bays, which allow it such devastating attacks on ground targets. Although the Dropper is slower and less manueverable, the bombs allow it a specialised role against heavier and tougher targets. Primarily an attack craft, the Dropper is out of place amoungst the rest of the CDI catalog, but it is a competant vessel against capital ships, destroying attacking vessels and troops ships. The Dropper has sold in smaller numbers than the rest of the CDI inventory, but has still managed to worry the New Republic government because of the number sold to warlords and other criminals who use them for extortion and other brutal attacks.