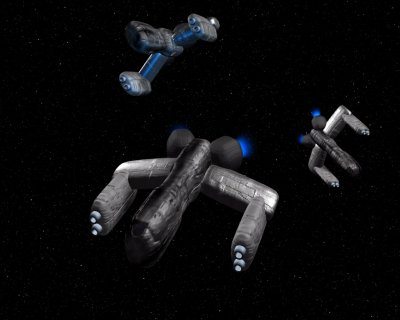 Description: After the destruction of Alderaan a native of that world, Almek Obsidian, became somewhat obsessive about military power, and set up Core Defence Industries (CDI) to supply defence to other worlds so the same could never happen again. However the unbalanced nature of the industrialist and the corporation he founded, led to many headaches for the fledgling New Republic, as the power weapons and vessels were sold to anyone without restriction, meaning that these state of the art weapons of war were available to terrorists, pirates and other criminals. Fortunately, for the New Republic at least, Almek Obsidian died after only a couple of years, and the absence of his genius, although unbalanced, hand at the helm meant that CDI went into receivership shortly afterwards. The CDI Eagle Class Super Starfighter takes advantage of the same Tachyon Technology as the Drone Frigate, utilising power tachyon beams which inflict more damage than even Proton Torpedos. The four powerful cannons can smash most opposing vessels into dust, and the fighter itself is very tough and has very resiliant shields, allowing it to handle massive amounts of damage. However all of this technology does come at a price, and pilots report that the fighter is sluggish to respond, and buyers have moaned that the price is too high for the advantages that the vessel offers.