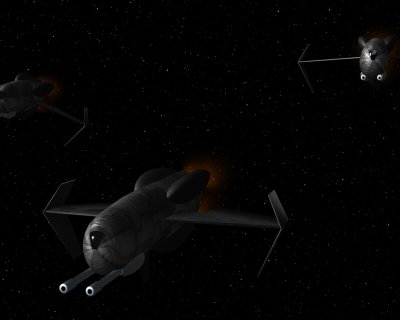 Description: After the destruction of Alderaan a native of that world, Almek Obsidian, became somewhat obsessive about military power, and set up Core Defence Industries (CDI) to supply defence to other worlds so the same could never happen again. However the unbalanced nature of the industrialist and the corporation he founded, led to many headaches for the fledgling New Republic, as the power weapons and vessels were sold to anyone without restriction, meaning that these state of the art weapons of war were available to terrorists, pirates and other criminals. Fortunately, for the New Republic at least, Almek Obsidian died after only a couple of years, and the absence of his genius, although unbalanced, hand at the helm meant that CDI went into receivership shortly afterwards. The CDI Booster Class Heavy Starfighter is a well armed, fast and tough starfighter, which bares some resemblance in design to the Tie series of starfighter, with all of its design based around making it as powerful a weapon as possible. Although doubtlessly well designed, many buyers disliked the utilitarian design, and lack of Missile or Ion weaponry to round out the vessels role. However this never affected sales, as the Booster has sold well, mainly to planetary governments, although also to the criminal sector which worried the New Republic so much.