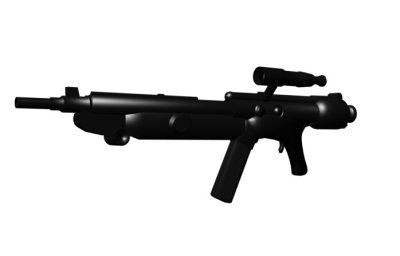 *: The Multi Purpose Blaster Rifle has a Sniper Mode, which allows it a longer range, and takes advantage of the built in Sniper Scope (which drops all range penalties by one level). This however drops the fire rate of the weapon, meaning it can only be fired once every two rounds.


Description: After the destruction of Alderaan a native of that world, Almek Obsidian, became somewhat obsessive about military power, and set up Core Defence Industries (CDI) to supply defence to other worlds so the same could never happen again. However the unbalanced nature of the industrialist and the corporation he founded, led to many headaches for the fledgling New Republic, as the power weapons and vessels were sold to anyone without restriction, meaning that these state of the art weapons of war were available to terrorists, pirates and other criminals. Fortunately, for the New Republic at least, Almek Obsidian died after only a couple of years, and the absence of his genius, although unbalanced, hand at the helm meant that CDI went into receivership shortly afterwards. The CDI Mutli Purpose Blaster Rifle is based upon the Imperial Stormtrooper One Blaster Rifle, and takes this design and improves upon it. With a great ammo capacity, longer range and higher damage, the weapon is already impressive, but with the addition of the weapons Sniper Scope and Sniper Mode the weapon is truly revolutionary. Sales have been high, to both planetary defence forces and militaries, as well as to individuals and criminal factions, and this was the only CDI product that was actually bought by the New Republic, which given the tension between the two organisations speaks highly for the weapon indeed.