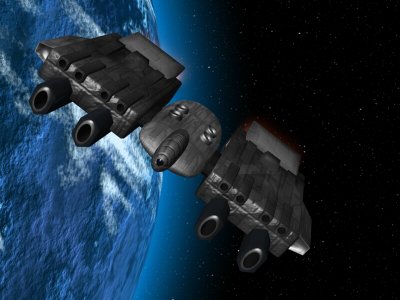 *: These weapons combine the effects of an Ion Cannon within the same weapon as that of a TurboLaser Cannon, this allows the weapons to be switched between conventional damage, and Ion Damage.


Description: After the destruction of Alderaan a native of that world, Almek Obsidian, became somewhat obsessive about military power, and set up Core Defence Industries (CDI) to supply defence to other worlds so the same could never happen again. However the unbalanced nature of the industrialist and the corporation he founded, led to many headaches for the fledgling New Republic, as the power weapons and vessels were sold to anyone without restriction, meaning that these state of the art weapons of war were available to terrorists, pirates and other criminals. Fortunately, for the New Republic at least, Almek Obsidian died after only a couple of years, and the absence of his genius, although unbalanced, hand at the helm meant that CDI went into receivership shortly afterwards. The CDI Crusader Class Patrol Ship is a compact and highly manueverable capital ship, which packs a lot of forward firepower, allowing it to take on vessels much larger than itself. Its multiple missile launchers and combined Ion/Laser weapons allow it to disable and destroy vessels with ease, which has led to its increasing popularity with pirates and rogue warlords who use its abilities to sieze enemy ships and cargoes, leading to increased worries by the New Republic about ownership of such a powerful small vessel. However when used properly, the Crusader can protect space lanes, and take out pirate bases, meaning it has served its original design criteria perfectly.