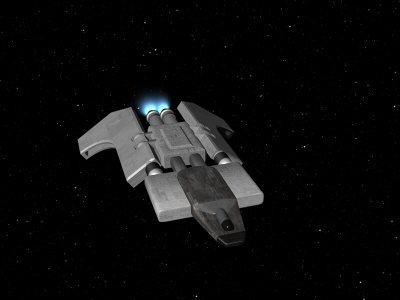 Description: After the destruction of Alderaan a native of that world, Almek Obsidian, became somewhat obsessive about military power, and set up Core Defence Industries (CDI) to supply defence to other worlds so the same could never happen again. However the unbalanced nature of the industrialist and the corporation he founded, led to many headaches for the fledgling New Republic, as the power weapons and vessels were sold to anyone without restriction, meaning that these state of the art weapons of war were available to terrorists, pirates and other criminals. Fortunately, for the New Republic at least, Almek Obsidian died after only a couple of years, and the absence of his genius, although unbalanced, hand at the helm meant that CDI went into receivership shortly afterwards. The CDI Xel Class Shuttle is a tough and reliable modular shuttle, which can be reconfigured quickly and easily different roles. With a tough hull and good shields it is often used for troop transport duties, but in this role it is slower and less well armed than a number of its direct competition, and was originally designed to serve just as a passenger and cargo transporter. The least threatening of the CDI vessels, it sold in high numbers with both the New Republic and the Empire buying at least a few and was also the last of the CDI vessels to cease production. Rumours exist of other companies having bought the design and preparations to re-release the vessel under a new name, but so far these have not come to anything.