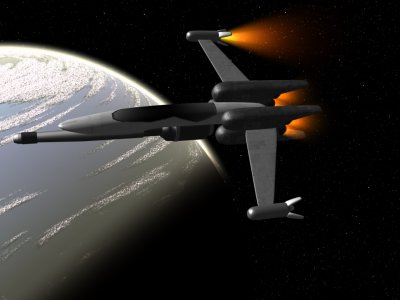 Description: After the destruction of Alderaan a native of that world, Almek Obsidian, became somewhat obsessive about military power, and set up Core Defence Industries (CDI) to supply defence to other worlds so the same could never happen again. However the unbalanced nature of the industrialist and the corporation he founded, led to many headaches for the fledgling New Republic, as the power weapons and vessels were sold to anyone without restriction, meaning that these state of the art weapons of war were available to terrorists, pirates and other criminals. Fortunately, for the New Republic at least, Almek Obsidian died after only a couple of years, and the absence of his genius, although unbalanced, hand at the helm meant that CDI went into receivership shortly afterwards. The CDI Turbo Starfighter is a fast and agile starfighter design, it is armed with only a single weapon, a TurboLaser cannon capable of inflicting huge amounts of damage to opposing vessels. The Turbo Fighter was designed to allow planets with no capital ships to defend themselves from attack, however the slow recharge rate of the main weapon, and the relative weakness of the fighter itself has led to a poor success rate for missions flown by this fighter, especially given its inability to defend itself from other fighters. The high speed and high manueverability of this vessel allows it to dodge capital ship defences with ease, but even this has not made the design successful, and only a few pirate groups who use it for disabling prey have found the design useful, especially when teamed up with defensive starfighters to ward off enemy attacks as was originally intended. In fact the only reason that these fighters were ever seen to be unsuccessful, was simply down to misuse of the fighter, putting it against other starfighters instead of allowing it to take out capital ships, when used properly the Turbo Fighter was extremely successful.